Interview with Domènec Miquel, author of the guide to the Monastery

For this Sant Jordi we have prepared a very interesting interview with a well-known figure in Sant Cugat. This is the historian of Sant Cugat Domènec Miquel, a reference in the conservation and current history of the Monastery.

The guide of the Monastery

This year for the book and rose festival, we propose a very special book in guide format, it is the new guide of the Monastery, written and proposed by Domènec Miquel. In this guide you will find the whole history of the Monastery and its inhabitants, the Benedictine monks along with a series of unknown curiosities about the modus vivendi of the monks, their activities and, on the other hand, all the secrets of the architecture of the building.

Then we leave you with the interview; this will be divided into two parts: the author’s presentation and a second focused on the guide and its secrets.

Presentation of the interviewee 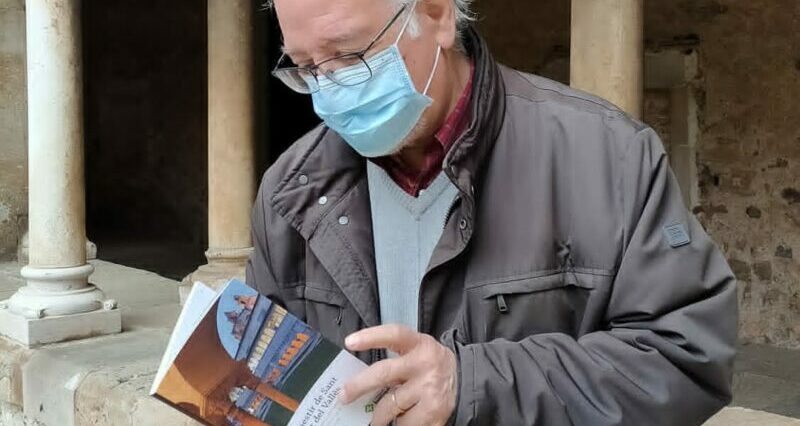 My name is Domènec Miquel and I am a historian, a not very grateful profession. I started my academic career-studying archeology, but then I moved on to modern history because it allowed me to work alone. However, I was involved in archeological excavations until 1982.

My family has been from Sant Cugat all my life, when my father turned 90 I made him a family tree. I was convinced that the Miquels had arrived in Sant Cugat with the migrations of the s. XVIII, but I saw that in 1308 they were already here, much sooner than I thought. It is really one of the oldest families in the town, along with the Canals and the Casanova, among others.

I could not find out where they came from before, I first found them in 1308 in the book of Batllia written in Sant Cugat. In this one a personage called Miquel Deztorrins appears, the last name comes from the Mas Deztorrins that will happen to be called Mas Miquel later. Curiously, this name will eventually become a surname. From here, you will find them centuries later.

My family has always been very attached to the Monastery. At the time of the auction of the cloister, it is always said that the person who intervened was the mortgagee Benet Portada, but this character was not alone. This man was accompanied by another gentleman, Josep Serrà Bolonyà who was the owner of Can Xandri and who helped him to fix everything. Now for a generation I am the owner of Can Xandri.

When in 1968 there is the whole problem of the walls, which the mayor wants to throw on the ground and make them 6 meters further so that cars could pass. Who led all the citizen protest was a cousin of my father. Just then, just as the mayor wanted to remove everything on the north side of the Monastery, the slaughterhouse, the cemetery and the football field, my father gave him a plot of land on the condition that he should do in 1 year. He said, I’ll give it to you, but you have to take it out in 1 year and if I don’t take it away.

We have always had a very close relationship with the Monastery, in fact when there was the first democratic town hall I gave a series of things and others, and in 1982 I joined the board of the Monastery and look, I still continue.

Let’s talk about the book

The guide is structured in two basic parts, one the historical introduction to understand a little the monastery of Sant Cugat. Today our perceptions of the Monastery are based on two models: Montserrat and Poblet. On the other hand, the monastic structure of Sant Cugat, especially with the structure of the Modern Age and the degeneration of the model of the Middle Ages, caused that from the s. VXI the monks should be children of nobles, this is already telling you that this is not just any Monastery. It was a stronghold of the nobility and they would be an extraordinarily conservative and extraordinarily staunch defender of feudal rights, and there was no way they would evolve mentally. It is a very special monastery and this is important to understand, as it explains why Sant Cugat goes where it goes.

On the other hand, there is the part of the Monastery and its architecture. In 1835 (confiscation of Mendizábal), when the Monastery was assaulted, the church was not burned because it served as a parish, as the parish had been occupied by the national militia and functioned as a barracks, but the cloister nor the abbey palace. What is really touched is the houses of the monks that not one is left. That is, if you are a farmer from Sant Cugat who sleeps on a straw mat and you know that the monks slept on 3 wool mattresses, then what do you do? Come and get the mattresses and take them with you.

Yes, there was a small fire, especially in the bread oven, as it was a feudal monopoly that was still maintained and wanted to end this model. But above all there was a plunder of the monks’ houses; the dishes, crockery, clothes, and furniture were taken away, and when all these things were finished, the beams and shingles were taken away. It is a time when Sant Cugat is growing in population; they need material to build the houses. Who buys the cloister when it goes up for auction? A French group that wants to dismantle the cloister to reuse it to build houses, will go from 800 to 2,000 inhabitants, they need houses to live. I always say that the history of Sant Cugat is like a beating heart; a plague comes, contraction and the population is reduced and later it will grow.

There are a number of houses on the lower street that are abandoned and the roofs dismantled, as only roofed houses pay taxes. If there is no roof it is no longer a house, it is an orchard. To which the demography is redone more houses are needed and those orchards become houses again, it is very curious.

In the cartoral there are many goddesses of people who want to be buried in the Monastery, many of whom left money, property, animals and slaves. Surely there would have been Saracen slaves working here and that is why we find some red-vaulted voussoirs. It should also be noted that this stone comes from the Rubí stream, so it is close. The name of the city of Rubí comes from the color of the stone in question. On the other hand, the bases and vaults are made of Montjuïc stone, the columns are made of Girona stone and the rest of the cloister (podium) would be made of stone, generically called Campanyà.

The building of the Abbey Palace is a part that was demolished in 1835, because as with all monasteries, Madrid granted permission to search for the treasure that had been buried by the monks, as everywhere there was a treasure of the monks that no one has ever found in any monastery. Then they decided to make a gallery that went inside the church and was under one of its pillars. They were so beasts that when they encountered the Roman wall they broke it by making a turn, in order to be able to pass, something unheard of, this was around 1850. This caused the building of the Abbey Palace that much affected structurally and a part had to be demolished. Now when we look at the building we can see some real windows and some later and rebuilt ones.

Finally, in the cloister no two capitals are alike, even the Corinthian capitals which may seem so are not, each has its own form, peculiarity, and singularity. 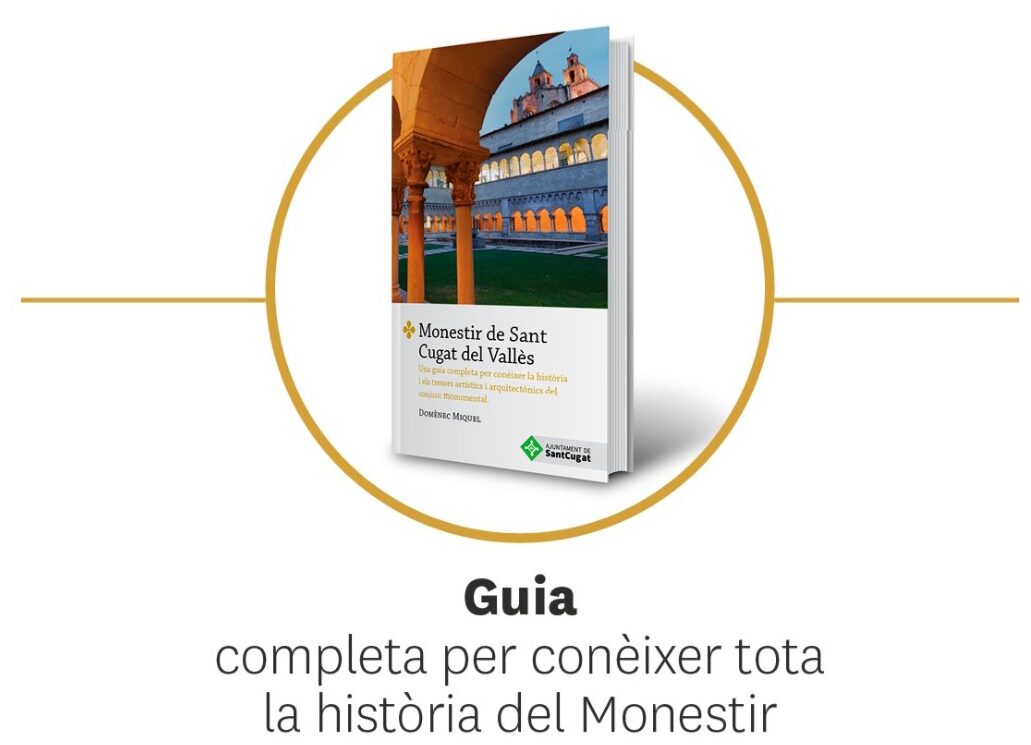 It is a guide written by anyone and of any level. It is a guide, not a book and it gives you the guidelines as you go along with it through the Monastery.

The stories that have been written about the Monastery have always started from the stories that the monks have written and they are very biased stories, as the monks try not to tell the truth. You need to make a more dispassionate story and telling what you find in other bands.

I have worked with issues of jurisdiction, as the inhabitants wanted to be under the jurisdiction of the king and not the abbot. The king’s jurisdiction is always more equitable and more benevolent. Well, if you look at the fountains of the Monastery, nothing happens, it’s a wonder. On the other hand, if you look for other sources of the real audience, they tell you what the monks don’t tell you. For example, throughout the s. VIX the veguer of Barcelona had to intervene here in Sant Cugat several times, because the monks passed. An example is the case of Domènec Rull, owner of Can Volpelleres, locked in the press by the mayor for an arbitrary cause, it is not known why. His family and friends turn to the veguer of Barcelona and he moves to Sant Cugat to review this imprisonment. From here and the unjust imprisonment of the owner, the veguer begins to pull the strings and the chastity problems of the monks begin to come to light. Of course, this in the books of the Monastery never comes out. On the other hand, when you look in the books of the royal audience you find allegations of rape where the names of the women came out, but not the names of the monks, this is what is not known and is not known about the Monastery.

Finally, torture of detainees. Luckily they were monks and preached Christian charity. Inside the Abbey Palace is the silo, the dome-shaped dungeon in the dark. In the. XVI when they put you inside there was a ring and they held your neck against the wall so you could not move from the wall. Which means you could have a pitcher of water in front of you and you couldn’t see, you had to pee and shit on it, you couldn’t lie down to sleep. So you ask yourself, was that what the monks did?

If you want to know more about the unknown stories of the Monastery, we encourage you to get one of the new guides of the Monastery! You can find them in this Sant Jordi in Spanish and Catalan, it will be a great way to expand your knowledge of the reference monument and the icon of our city. 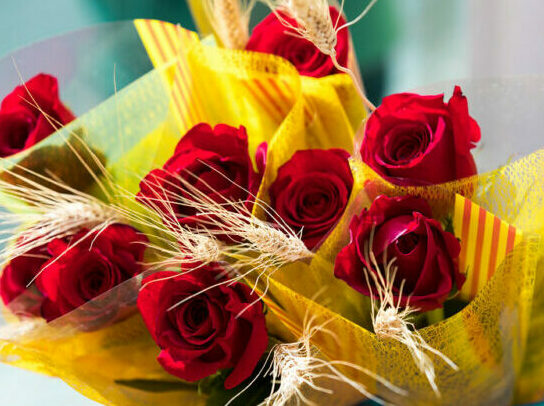 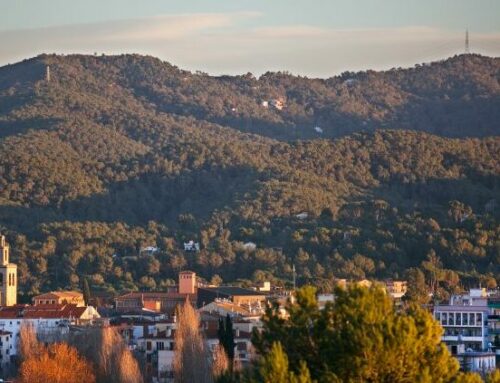 Why study in Sant Cugat? 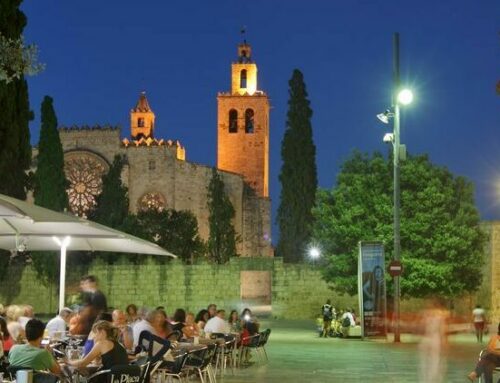 The best squares to enjoy the summer in Sant Cugat