The Romanesque Cloister, the union of Heaven and Earth.

Building of the Cloister began around 1190 thanks to a donation from Guillem de Claramunt, who wanted to be buried in this place near the tomb of Cugat the martyr. Work was completed by 1220, leaving one of the jewels of the European Romanesque style for posterity.

The master builder of the site was Arnau Cadell, who also directed the works of the Cloister of Girona Cathedral. On a small slab besides a capital in the north-eastern angle there is a depiction of the sculptor working on a capital. This is doubly notable, because never before in the history of Catalan art had the creator of a work signed it or left a self-portrait.

Each wing of the Cloister measures around 30 metres, which gives the courtyard a surface area of around 900 square metres. Each gallery has three sets of five arcades, separated by buttresses. The arcades are supported by two independent columns, of Girona stone. In total, the site has 144 columns and capitals, a highly symbolic number, alluding to the sizes of the walls of Heavenly Jerusalem described in the Apocalypse.

Also symbolic, as well as functional, is the washbasin-fountain located in the centre of the garden, as it evokes the idea of Paradise described in Genesis and the rising water makes the union of Heaven and Earth visible.

The cloister, organiser of the monastic life

The Cloister is the central area of monastic life. The different rooms of the Monastery are arranged around it. It acts as a great distributor giving access to the different departments in its perimeter. It is also a perfect place for contemplation, retreat and intellectual work.

The Cloister is a courtyard enclosed by porticoed galleries around which the rooms of the Monastery are distributed. Initially the entrance was located in the western gallery, which explains why the porter’s lodge and the hostel are attached to it, followed by the pantry and the cellar. In the 13th century, the Abbot’s rooms were on the upper level.

The northern gallery leads to the kitchen, the refectory and the calefactory, the only place with a fireplace to warm oneself on cold days. From the 16th century it became less important as the monks with specific posts had their own house. In the 18th century, the old kitchen and part of the refectory became the new chapter house. The mongets or young monks, minors educated in the Monastery, were taught in this gallery, the warmest place in the Cloister. Their dormitory was above the aforementioned rooms.

The eastern gallery was originally occupied on the ground floor by the infirmary, which later became the dormitory of the manats or servants and, in the 16th century, the Chapel of the Holy Cross. There is also a stairway to the upper level, the early chapter house, where the communal dormitories and latrines were located.

The southern wing is occupied by the church, which the monks entered through a Romanesque entrance. Its gallery was dedicated to tasks of reading and writing. It is the coolest place in summer but the coldest in winter, so if it was very cold, the monks could move and carry out their tasks in the chapter house.

People often talk about the decoration of the Romanesque capitals. However, it should be remembered that during the medieval period artistic images always became the manifestation of a symbolically represented message. So the capitals in the Cloister of Sant Cugat can be seen as an immense book written in stone.

Saint Augustine (354-430) fuses the philosophy of Neo-Platonism with Christian beliefs, later developed in the scholastica of the Benedictine monk Hugh of Saint Victor (1096-1141). The idea that the physical reality of the world conceals the transcendence of God influenced Romanesque art. The whole of nature can be read as a symbol, a means that, through the earthy world, enables us to connect with celestial reality. So Romanesque art avoids the realistic copy to outline its images and endow them with conceptual content so that they serve as a channel towards the contemplation of spiritual truths.

The meanings of artistic images developed in the capitals of the Cloister have been meditated by the monks themselves, the intellectual elite of the medieval world, and offer different levels of interpretation and readings that can be reached through a gradual path of ascension: philosophy, theology and mysticism. Thus, in Romanesque art, capitals cease to be a mere architectural element, as happens in classical styles, and also become the means for visual communication that seeks to transmit messages through the images.

The symbolic contents of the capitals were made by sculptors with great creative freedom. However, this freedom to portray imaginative figures difficult to identify can also be apparently grotesque and often quite hard to understand. Saint Bernard of Clairvaux (1090-1153) quite rightly ridicules these figures. 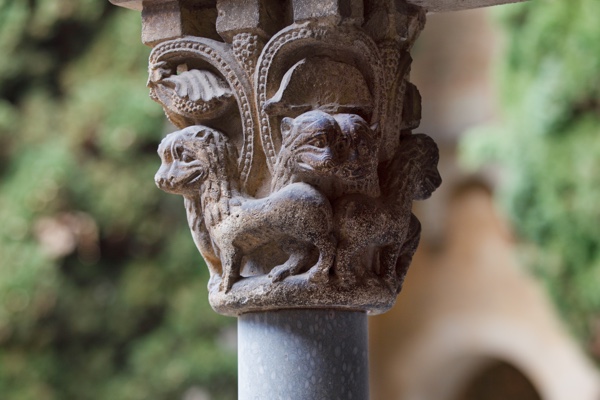 Iconography of the capitals

The capitals of the Romanesque Cloister of Sant Cugat are an illustration of the iconographic richness of medieval art and the technical expertise of a builder’s workshop that provided the Monastery with a sculptural ensemble that is one of the most precious in European medieval heritage.

We find capitals with scenes from the life of the monks, biblical episodes, profane scenes, vegetal elements, animal figures, creatures from ancient mythology…

Jurgis Baltrusaitis (1903-1988) was the first scholar to group the capitals of monasteries in four generic types in 1931: Corinthian, ornamental, figurative, and narrative. However, we have yet to discover a consistent and unified programme regarding the distribution of capitals. The different interpretations made from the present are intellectual assumptions that often have little to do with the mental universe and mysticism of Romanesque art.
Only the southern wing features a narrative and diachronic plan of episodes from the history of salvation, beginning with Majestic God among lions and continuing with Old Testament scenes, notably featuring the cycles of Adam and Eve, Noah and Abraham. The annunciation to the shepherds introduces us to the time of the Gospel, followed by the massacre of the innocents, the multiplication of loaves and fishes, the triumphal entry of Christ into Jerusalem, the empty tomb, Jesus commanding the apostles to preach, and the dormition of the Virgin Mary. The evangelical cycle ends with psychomachia, or triumph of virtue over vice.

The best study on the Cloister is still the one by Immaculada Lorés, from 1991, which shows that the rest of the galleries do not have a continuous narrative line but only separate scenes that take on a high meaning in relation to their context. In 1981 Jordi Ambrós had already noted that the narrative capitals are always on the interior side (except the capital of the reading monks in the southern gallery), while the vegetal capitals are found on the exterior side. In 1989, Rivilla linked the location of certain evangelical scenes with the annex rooms. 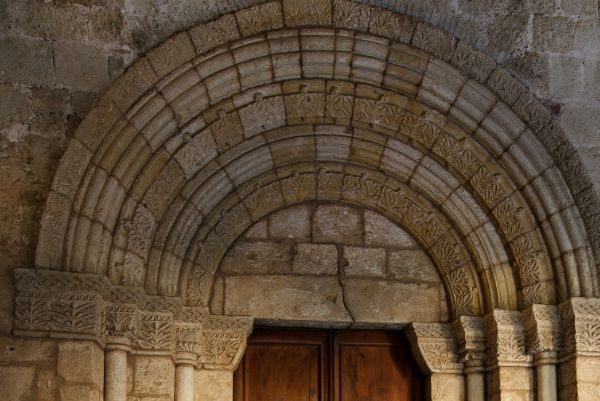 Cloister entrance in the church

The southern gallery of the Cloister features a Romanesque entrance linking the Cloister to the monastic temple. It is an important work both for its structure and vegetal decoration, later than the capitals.

The southern gallery of the Cloister, the last to be built, has an important Romanesque entrance in its eastern side, which is the fundamental link between the galleries of the Cloister and its rooms with the monastic church. Initially it was a very simple opening, covered by a pitched roof above which there a wall section measuring eight metres long decorated with mural paintings, of which we have some fragments in the Museum.

Later, the construction of the barrel vault of the Cloister galleries covered this mural and meant that the entrance had to be redesigned. The new work, which we can still see, is still Romanesque style, with an exuberant vegetal decoration in the archivolts and capitals of the columns. The tympanum, however, is smooth.

The large crack to the right of this entrance is a differential settlement between the first and second phase of construction of the gallery wall. The crack continues around the vault and meant that a third column had to be placed behind the Adam and Eve capital as reinforcement. The decoration of its capital is similar to that of the entrance.