In the 13th century a castle where the different Kings of Aragon spent some time was built upon the remains of an older building, probably a hospital. The fortress, symbol of the feudal power of the Monastery, finally became the residence of the abbot from the 14th century. It has an attached raised cistern to supply water to the monks and the Cloisters’ jet. King Philip V’s order to destroy the Catalan castles meant that the building became a palace, so that its façades were altered and they built upon the former Gothic courtyard. Since the monastic secularisation, it has been the parish house. 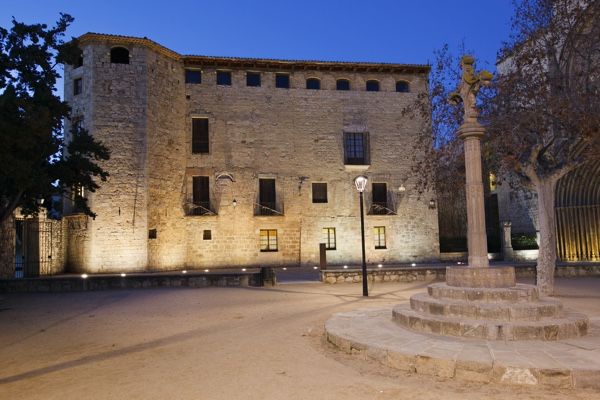 From Hospital to Abbot’s Palace

In the 10th century there was an early building in the place today occupied by the Abbot’s Palace, probably a hospital for poor people and pilgrims. Two hundred years later, the hospital was moved to the other side of Octavià Square, in the street bearing its name.

In the 10th century there was an early building in the place today occupied by the Abbot’s Palace, probably a hospital for poor people and pilgrims. Two hundred years later, the hospital was moved to the other side of Octavià Square, in the street bearing its name.

Using the remains of the previous building, Octavià Castle was built in the 13th century, and enlarged in the fourteenth. Rather than a military fortress, it has always been an element of prestige, the symbol of the monks’ feudal lordship. Different Kings of Aragon stayed here for some time, so that it fulfilled the same function as the royal palace of Poblet or of Santes Creus. In 1343 King Jaume III of Majorca was imprisoned here after having been defeated by King Pere III the Ceremonious.

To comply with King Philip V’s order to destroy the fortifications, in 1716 the monks decided to open windows and balconies on the façades so that it lost its military appearance and looked like a palace, the abbot’s. Roofs were built upon the merlons and the spaces between them were bricked up or transformed into windows. Interior ceilings were raised and higher and more seigniorial doors placed. Abbot Llupià had the Gothic courtyard built and the staircase covered, and his coat of arms set upon the new entrance. In 1844 it became the parish house, a function that continues today. 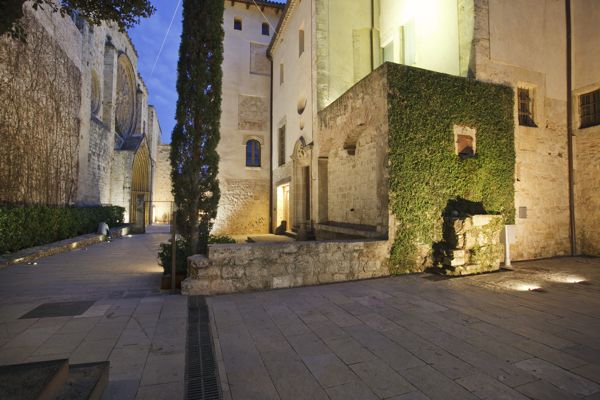 Cistern of the monastery

Wells have always supplied water to the Monastery and the town of Sant Cugat. The construction of the Romanesque Cloister and the desire to have a central jet involved looking for water at a certain distance and building a mine or piping that ended in a raised cistern.

In this way the difference in level between the cistern and the centre of the Cloister creates, through a communicating vessel, enough pressure to produce a vertical jet. The Monastery is located between two streams, that of Sant Cugat and of Vulpelleres. For topographic reasons, the second was chosen, which facilitates the layout of the conduct from the origin to the Monastery. The water transported was for the exclusive use of the Monastery and only for a brief period of time in the eighteenth centre did it also supply the only fountain in the village. When the properties of the Church were confiscated, as is logical, it was one of the first things to be reclaimed.

The cistern is a rectangular prism-shaped body built with ashlars, currently integrated into the Abbot’s Palace. On the northern side, there is a small iron door that acted as overflow, underneath which there had been a Roman marble tomb used as a drinking trough, today held at the Archaeology Museum of Catalonia, replaced by a stone washbasin. Above the small door there is the oldest representation of the heraldic shield of the Monastery, consisting of a castle: the castrum Octavianum.