The Monastery of Sant Cugat, occupied by a male religious community governed by the Rule of Saint Benedict, was in practice, like most large monasteries, a productive-administrative unit with an independent government system of counts and bishops. Although daily life took place within its walls, it had extensive holdings that provided it with everything essential for the monks’ survival.
The walls defended the Monastery, separated it from the outside world, structured it and created an internal site of which the most important parts survive: the church, the Cloister and its rooms, and the Abbot’s Palace. 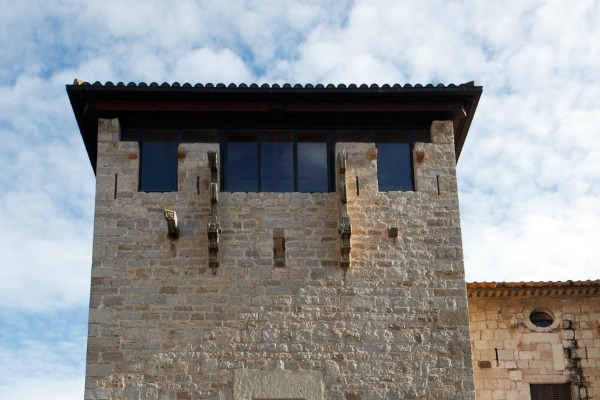 This construction fulfilled the function of tribute tower to Octavià Castle and was the entrance to the monastic site, which had the essential elements to defend it from possible invaders.

Attached to the Abbot’s Palace, it houses the entrance to the Monastery of Sant Cugat. It also acts a tribute tower; in other words, it is the last stronghold of the site. It is preceded by a barbican, built on today’s Octavià Square. Its former position is indicated on the pavement, where we can also see the remains of the old moat, which was crossed via a mobile wooden bridge.

Of all the defence structures of the entrance, only the tower remains, as the others were destroyed after the defeat of 1714, when King Philip V ordered the destruction of the Catalan fortifications.

Om Square was the intermediate part between the strict enclosure and the outside world beyond the Monastery walls, which is why there were lay people here.

The name of the square comes from the elm tree planted in the centre. The square formed part of the monastery site, but was not considered a strict enclosure as lay people could enter for different reasons. For example, in the northern side the provost’s main house, where the monk who exercised jurisdictional lordship over the village lived, to whom the subjects had to pay the ground rents, tithes and other taxes and was home to the mayor’s judicial court. Of this building, today only the lower part of the prison tower remains, which was as high as the main entrance tower.

In front of the square, in the east, is the Small Cloister, a late 16th century Renaissance construction. The building occupies the space formerly occupied by the Monastery’s porter’s lodge and where lodging was given to the poor and pilgrims in the 10th century. Today it is still the entrance to the Romanesque Cloister.
The southern side of the square is occupied by the former Abbot’s Palace, a building that today houses parish services.

The isolation of the monasteries and their inhabitants is physically reflected by the walls that separate the monastic site from the rest of the world. From the 14th century, they were fortified and, consequently, became powerful defence walls.

All monasteries are surrounded by a wall that separates the monks’ enclosure from the rest of the world; a monk could only cross this boundary with the Abbot’s permission. From late antiquity, this enclosing wall also had defensive functions and became a defence wall. In the second half of the 14th century major expansion work was carried out on the monastic site towards the east, protected by new walls, to which a set of houses for the monks holding monastic posts was attached.

In 1539 Abbot Pere Despuig began important architectural reforms, notably including the extension of the site towards the south with the construction of more walls and the inclusion of new defence towers. All of them were shortened by decree of King Philip V and in the late 18th century doors and windows were opened, making them indefensible. The attached houses disappeared with the confiscation of ecclesiastical properties in 1835.